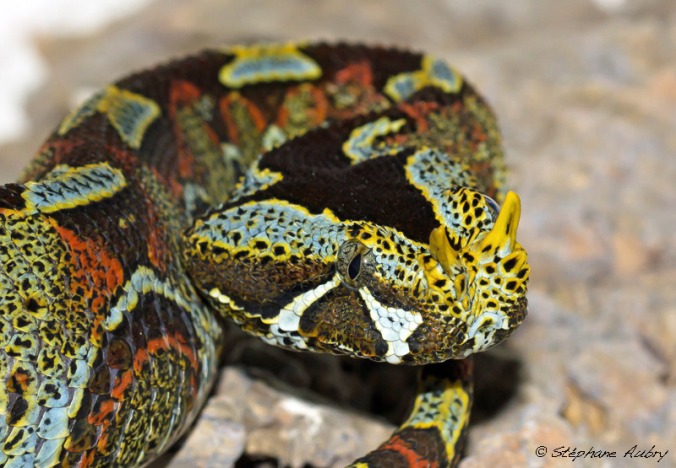 This creature is by far one of my favourite when it comes to appearances! Gorgeous bold colours from blues and greens, to reds and yellows, accompanied by some black to make the colour even more striking. The first picture I saw of this specimen, the colour looked like that of an African beaded artwork, the bright colours resembling as much!

I’m sure I don’t need to go into too much depth about where it got its name from, as the little horn-like protrusions give it away, I would say.

Coming from the Western and Central parts of Africa, this snake inhabits rainforests and swamps, enjoying lovely humid and wet environments.

Being from the same family (Viperidae) and genus (Bitis) as the Gaboon Adder, it explains why I enjoy this species just as much! They share many similar visual qualities, as well as they are both viviparous, meaning the young develop within the body in embryos, like most mammals, with a lack of eggs. Head shape and pattern are quite similar, but the Rhinoceros Viper remains more vibrant in colour, as well as it has 2 to 3 unique little horns at the tip of its snout, that are more prominent than that of the Gaboon.

This specimen is rather small, with its length usually staying under a meter long, usually around 70 – 90 cm, though some have been known to grow to 1.3 metres in length.

Being mostly a land dweller, this nocturnal serpent mostly hunts rodents, but has been found in aquatic environments, as well as occasionally in trees, made possible by its somewhat prehensile tail, also feeding upon frogs and fish.

In One of my previous blogs, I discussed the Gaboon Adder, eventually discussing its venom. Now like the Gaboon, this snake also has a high venom yield, but only a small amount of the Rhinoceros Viper’s venom can be deadly to people. Luckily, just as it’s cousin, it has a mild temperament, though less so than the Gaboon, and bites are very rare, the snake usually giving out quite the lengthy hiss if disturbed, and what a his it is, as it is known to have the loudest hiss of any African snake.

The poor snake though could not live up to the fang size of its relative, having small fangs of only about 1.5 cm, but is also able to strike quickly forwards as well as sideways, even without coiling. Holding this specimen by the tail is not the safest move either, as due to its slightly prehensile tail, it can easily fling itself around to strike.

One last interesting piece of news that completely shook my and made my mind explode and me bubble with excitement and absolute amazement is I found out there is something called the Gabino, a Gaboon Rhinoceros Hybrid! Though it is captive bred, it is also naturally occurring! The fave appearing more Gaboon-like, but still with the gorgeous Rhinoceros colouration! 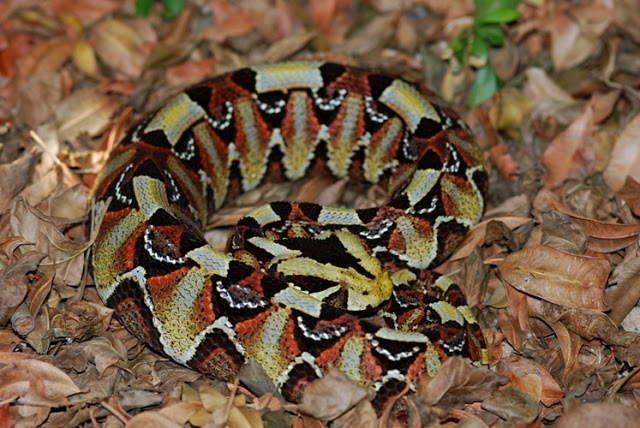 A gorgeous specimen that is definitely a site go see, as it has an unbelievably captivating beauty!